Early ice walleye fishing can be some of the most action-packed fishing of the ice season. But it’s important to remember ice safety rules. Early ice conditions often vary, not just from lake-to-lake but from spot-to-spot. If you follow ice safety guidelines, you should stay safe and get into some great fishing.

We recently visited with Hayward, Wisconsin fishing guide, Tom Boley, to discuss his tactics for early ice walleyes. If you would like to hear the entire conversation from the Fish House Nation Podcast, click the play icon on the audio player below. If not, scroll below to read more.

Boley enjoys fishing walleyes during early ice because the fish are active and the crowds are light. “Generally, very few people out and the fish are right where we left them a month before when we were still fishing them in the boat and they’re very active. That’s the part I like most about them and it’s a lot of fun.”

One of the most challenging aspects of fishing is locating the fish. Boley breaks down new waters using a simple formula. “I have a very basic approach when it’s my first time on a lake. I like to look at a map of the lake and pick the biggest basin of water, the biggest, deepest, open part of the lake. Then I pick the biggest piece of structure in that area. So if it’s a thousand-acre lake, maybe it’s a 100-yard point. If you’re fishing Mille Lacs maybe it’s the biggest rock reef on the lake. Sometimes depth will vary. Lake depth is all relative but generally first ice we catch walleyes a lot shallower than we do the rest of the winter. A lot of the waters I fish for walleyes around here(in Northern Wisconsin) have basins that are 60+ feet deep. We’re fishing a lot of rock or weeds in twelve to fifteen feet of water.” 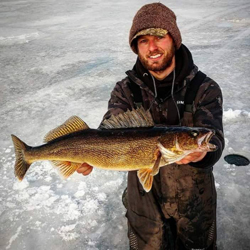 Once he’s found the location he feels is right, Tom starts drilling holes. “I drill a lot less holes on lakes I know well. I know where the big rock on a spot is. Walleyes tend to always school on the same couple of key pieces of structure on a spot. If there’s a reef that’s fifty yards long and they school up on both points and then two big boulders in the middle, I might punch five holes around each of those sweet spots. But if I’m on a lake I’ve never fished before, I pretty much have to grid it out to find that stuff.”

Tom also utilizes skidhouses when chasing walleyes. These are not the ultra-comfortable, RV style fishhouses. He utilizes his small skidhouses as a way to move from spot-to-spot without having to constantly setup and breakdown gear the way someone using a portable would. “I run all smaller shacks, 6x8s or 5x7s. My shacks never come off the four-wheeler. We might pull up to a spot, pull stuff out of the shack, punch 10 or 15 holes in a spot, run through them with a flasher and a jigging Rap, and if we don’t mark fish we throw everything back in the shack and go right to the next spot. There are a lot of days we might fish 30 spots in a day or we might fish ten of the same spots, three times over throughout the day. I use my shacks more to haul  gear around the ice than to actually fish out of. I put the heater on inside the shack, hop on the four-wheeler and bomb out there. By the time you get to your spot, there’s no ice on your auger, your rods are all warm, and the bait is warm. A lot of times I just use my shack to keep gear warm and haul it around the lake.”

Want to hear more? You can listen to the conversation on the  Catch Cover YouTube Channel. To see Tom Boley’s ice fishing videos, check out his YouTube channel or go to his website for booking details.