Some call them sunnies, some call them bluegills. Either way, they’re a lot of fun to catch and they make incredible table fare. But big bluegills are becoming more difficult to find in Minnesota lakes. We discussed bluegill management with Dave Weitzel, Grand Rapids Area Fisheries Supervisor with the Minnesota DNR on a recent episode of the Fish House Nation Podcast. Before getting into why we’re seeing fewer giant bluegills and how to change that, Weitzel shared some bluegill basics with our audience.

“Their biology is really kind of interesting. They do some things that are a little bit unexpected especially in the way they react to predators, including humans. Their basic biology is that they are a warm water fish. In our part of the world they will typically live to about ten years old. Their growth rate is dependent on the length of the growing season and the water temperature. In the southern United States you can grow a large bluegill in as little as three years. The challenge in my part of the country, up here in northern Minnesota, is growth rates are really slow. They only grow about an inch every year. It takes about eight years to grow one of those quality sized eight inch bluegills.” 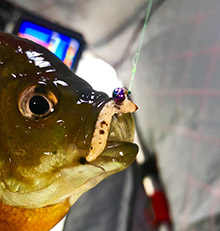 Weitzel says bluegills are well suited for just about any habitat and it’s rare that any stocking is needed. “In some cases, they reproduce too well on their own. We end up with these lakes that are overpopulated with small bluegill. When you have a lot of small bluegill it really affects their growth rate. Each one of those fish is competing with the other fish around it. You can end up with lakes and streams that have stunted sunfish populations. This is where harvest can make a really big impact. These fish are going to try to compensate for the biomass that is lost when anglers remove fish.”

All bodies of water have a set amount of fish it can support. It’s a balancing act between food, habitat, and predation. “Every lake has what biologists call “carrying capacity.” A lake can support so many pounds of bluegill. It can support a heck of a lot of small bluegills or relatively few large bluegill. But if you weigh the total of all those fish, it’s going to reach it’s natural carrying capacity. What happens is anglers typically like to harvest the largest sunfish first. We’re removing the heaviest fish from the system and that creates a void. The population drops below carrying capacity and the population wants to fill that void as fast as possible. The fastest way to do that is, especially in a place where growth rates are slow, is to have increased survival of young sunfish.”

The reproductive strategy of the population changes as larger fish are harvested. “So basically if we go out and remove a bunch of these big bluegill, the lake is going to compensate by having the next generation produce a large year class. That’s ok from time-to-time but if we do this for decades before long we have generation after generation of these small bluegill that have taken over the lake and affected their growth.”

As bluegill shift their focus from growing to reproduction, the size structure of the entire lake population changes. “Their main goal in life is to reproduce. If they’re in a system where it’s not likely they’re going to live very long, they’re going to reproduce at a younger age and a smaller size. If they’re in a system where they are going to live for a long time there is an advantage for growing large because the larger bluegill are going to get the best spawning habitats and attract the best mates. You’ve probably seen bluegills spawning. What you’ll find is they form large colonies where there is maybe anywhere from a dozen to one hundred fish on a spawning site. The largest bluegills tend to get the best spawning sites. That creates competition among the males and gives them a reason to grow large. Once we remove the large males, the competition is gone. The smaller males can have prime spawning habitat and they don’t have to compete any more. The problem with this is as males start to spawn at a smaller size and younger age, they will shift their energy. All the energy that was going into growth now goes into reproduction. Reproduction is a vigorous activity if you’re a male. You have to defend the nest and if you’re a female you have to produce eggs and that comes at an energy cost.” 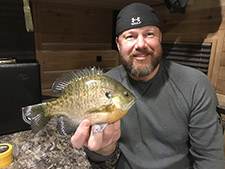 Once this starts to happen, it’s difficult to reverse the cycle. “Once they’ve changed their biological strategy there hasn’t been a lot of success stories to bring a lake back. With that said, Wisconsin is a little bit ahead of us on some of the research. They’ve been looking at this a little longer than we have. They have some lakes that are starting to show some progress. But you’re talking about a 20 year time period of regulations before they started to see these changes. In lakes that have gone down the biological path that it’s an advantage to stay small, maybe we can turn some of those around, but you’re going to be in it for the long haul. Whereas, if it’s already producing big bluegill and you can’t predict what the fishing pressure is going to be like in the future it probably makes some sense to protect that fishery.”

That protection comes in the form of new bag limit proposals. Currently, the statewide sunfish/bluegill bag limit is 20 fish with some lakes under more intensive management. The Minnesota DNR is asking for input on proposals that could decrease the limit on select lakes to ten fish and in some cases five fish. A smaller bag limit isn’t unprecedented according to Weitzel. “I went back and looked at our bluegill regulations. They date all the back to the 1920s in Minnesota. I was surprised to learn that bluegill regulations were a lot more conservative than they are now. That’s almost the opposite of what we find for any other species. For most species we’ve become more restrictive over time. In the case of bluegills, if you go back to the 1930s, the daily limit was 15 fish and there was a long closed season… if you fast forward to about the mid-1950s, that’s when the limit was changed to a 30 fish limit and we allowed year round harvest. That seemed to kick off the time when harvest of large fish seemed to have a biological impact.”

Weitzel adds that those fish were caught with very little technology. Today open water and ice anglers enjoy using incredible electronics, tackle, and easier access to water using high end boats in the summer and climbing into advanced shelters in the winter. Simply put, anglers of today have advantages that our forefathers would have never dreamed of.

Weitzel says DNR surveys show there is growing concern about overharvest and maintaining quality fishing opportunities. While support is strong, there are some people who are opposed to adding more regulations. They feel that having stricter bag limits on some lakes adds confusion and could lead to people inadvertently breaking the law.

A statewide bag limit reduction was considered but there wasn’t enough interest among anglers and Weitzel believes a statewide reduction doesn’t make sense from a biological standpoint either. “What we found is that not all lakes have the biological potential to support large bluegill, even with human harvest out of the equation. There are going to be lakes that favor stunted bluegill where that early spawning biology is an advantage to the fish. To reduce the limit in those lakes is taking opportunities from people when there is no biological need to do it. I’d say around half the lakes in the state don’t have the growth potential to make large bluegills. It’s absolutely no problem harvesting a 20 fish limit from those lakes.”

Although a statewide bag limit reduction didn’t get support, surveys showed anglers were interested in better sunfish management and smaller limits on some lakes. The Minnesota DNR went to work using that information. “We had our biologists go through forty years of lake survey data across the state to identify the best of the best lakes that had the biological potential and now we’re working through the process of getting social data on those individual lakes to see if there’s enough interest to move forward. There are some lakes that have been proposed that have very strong support. Those ones are a no brainer. You have biological potential and folks that say they would like to see this lake with special regulations. Those lakes will probably move forward. Lakes that are more controversial, maybe there’s a biological potential but not public support, we’re going to drop those regulations. The ultimate goal of a fisheries biologist is not to produce the maximum potential of a fishery. It’s to produce the fishery that people enjoy the most.”

Dave Weitzel is a recent guest on the Fish House Nation Podcast. To hear the entire conversation with Weitzel, click the player below or go to our podcast page by clicking here.