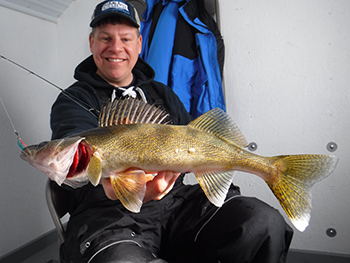 At first glance, things in the natural world don’t always make sense. But often, after having some time to really think about them, they make perfect sense. One phenomenon is firing up walleyes in a neutral mood to have that one small moment in time in which they feast. That is all it takes for an ice angler to experience walleye success. And a great way to accomplish this through the ice? Well, come on feel the noise.

Noise in the fishing world can come in a lot of forms. Pounding the bottom with your lure, the jigging action you create, rattles, vibration and spinners all create noise that can attract walleyes. One of the ways walleyes sense their next meal is through their lateral line. This lateral line senses vibration and noise in the water and can cause a natural triggering effect.

Over time, I have been turned on to using noise, becoming more aggressive with my approach in extracting walleyes and saugers from the icy depths across the ice belt. Some of this trial and error has been during times of a tough bite. Whether it is a cold front rolling through as they do periodically throughout the winter or perhaps a day in which the walleyes and saugers just aren’t feeding as well which could be for many reasons, noise has definitely been a strong tool in my walleye tool belt to catch more fish. 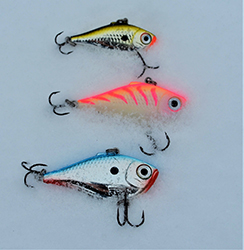 There are a couple of go to presentations / lures that I start with when I want walleyes to feel the noise. First, a vibrating lure with bb’s in it, such as a Rapala Rippin Rap. The second lure is a jigging spoon with rattles tipped with a minnow head or tail. There are certainly times when rattles will out fish a spoon without rattles and vice versa. As a rule, when I fish stained water lakes such as Lake of the Woods, I am a fan of rattles and a bit more noise.

For years, I was a fan of the lipless crankbaits for open water fishing, but had never used them through the ice. This technique first caught my eye when a local guide up at Lake of the Woods talked to me about how years back he used to use a Rattle Trap to ice March walleyes. Lake of the Woods has an extended ice fishing season with houses on the ice through March and the walleye season open through April 14th. Hence, anglers can target March walleyes putting on the pre-spawn feedbag.

He said he would be ripping a trap in one hole and deadsticking (a live minnow six inches to a foot off of the bottom) his second hole. He said there were times when a walleye would hit that trap so hard it almost rip the rod out of his hand.

I experimented a bit with lipless cranks through the ice but really started having success with the Rippin Rap. Now, it is a lure that I often lead with for my jigging line through the ice.

I experiment with jigging action, watching my electronics allowing them teach me what the walleyes want that day. Some days, the walleyes’ moods are consistent, wanting the same action for the lure. Other days, it is basically fishing each individual fish to learn what they want.

The normal jigging cadence I begin with is to pull the lure up in about two foot increments, enough to feel the vibration and hear the rattles. I then will let it free fall into the strike zone, which in my mind is normally about a foot off of the bottom.

I do mix the jigging up, giving extra long and fast rips at times, shaking the lure as fast as I can, elevating the lure in the water column as some bait is elevated and fish see up.

Sometimes walleyes will slide in slowly on the lure. Other times there will be a mark on my electronics out of nowhere. That fish will eat almost all of the time.

When a fish slides in slowly, I work various jigging cadences until I get that fish to go. Sometimes they want the normal jigging routine with a free fall. Other times, will hold it just above them a bit and jig it more subtly much like I would a jigging spoon with a minnow head. Jig, jig, hold in strike zone. Shake, shake, shake, shake, hold in strike zone. Walleyes will hit this lure sitting still and at times will actually prefer it sitting still in front of them verses moving.

When a walleye flies in out of nowhere, this fish is hot and is ready to eat. Normally, all I have to do is get the lure in front of them, give it a couple of shakes and POW! I have seen this happen often, both with walleyes when the bite is good but also when fish are in a more neutral mood. I think it relates to the reaction strike we talk about when pulling cranks in the summer.

Often times on Lake of the Woods, nice walleyes will come through suspended. Keep an eye on your electronics. When you see a suspended fish, get your lure up to them quickly, but when you are about two feet below them, slow your reel and gently introduce the lure in their strike zone. Through experience, I have noticed screaming a lure up to a suspended fish out of nowhere will often spook that fish. 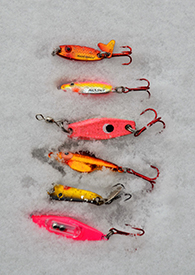 When fishing a jigging spoon, I also am a fan of noise. Whether in the form of a rattle inside the spoon or an extra spinner blade attached to the split ring of the treble hook, having some form of noise seems to catch more fish, especially in stained water lakes.

There are many really good choices in choosing a spoon with noise. Tackle manufactures have dialed in on noise and have created creative ways to gain that extra attention from a walleye or sauger. I use a variety and really let the fish tell me if they like my offering. If too many fish swim through without eating my offering, I will switch up size, color or action.

Similar to the lipless crank, my jigging cadence starts out with a jig, jig about one to two feet up and free fall into the strike zone. If a fish on my electronics isn’t reacting, I will drop the lure on the bottom and lift it into the strike zone. This can trigger fish as in the winter as walleyes and saugers are tuned into forage opportunities on the bottom whether minnows feeding, blood worms or larvae of different types.

My third succession is normally shaking the lure super fast right above the fish and letting the lure sit right in front of its nose or just up a bit as fish are used to feeding up.

Finally, I will shake the lure while slowly reeling in line which makes the spoon act as an escaping bait fish. This will often trigger a fish to chase. Don’t stop when a fish is closing, this will often cause the fish to slowly float back down to the bottom uninterested. Keep the lure rising in the water column. It becomes decision time for the walleye the higher up in the water column your lure gets and it becomes decision time for the walleye. Often times, the walleye will hit the lure from the bottom creating slack in your line. Set the hook!

The cool thing about letting walleyes feel the noise is it will attract and catch both the active fish and even cause a reaction strike amongst the inactive fish at times. On top of it, if a given walleye or sauger isn’t interested in eating the noisy presentation, often it draws them in which gives them a shot at your deadstick. Either way, feeling the noise is an effective tool in your walleye tool belt and will add to your walleye success.

Thanks to Joe Henry from the Lake of the Woods Tourism Bureau for this guest post.