Wisconsin ice angler Blake Tollefson loves chasing panfish all winter long but his passion is going after trophy panfish. While tungsten jigs with live bait or plastics are a staple of the panfishing world, one of Blake’s favorite techniques is using hard baits. “It’s a different way to catch them. Anytime there is a different way to catch something it makes it more exciting. When it comes to hard baits, in particular, they’re great at picking out the bigger and more aggressive fish, more so than your standard jig and plastic or jig and a wax worm.”

Tollefson says hard baits work great on just about any body of water but they’re more effective where the size structure is larger. “If I know I’m fishing a lake that has bigger fish. That’s usually going to be the first thing that I’m dropping down. I have some kind of hard bait, whether it’s a Jigging Rap style bait, rattle bait, or lipless crankbait tied on 100% of the time on at least one of my rods.”

Tollefson says he uses hard baits over the same structure that most people use tungsten jigs. There isn’t anything special he’s looking for before dropping a hard bait down. “They aren’t as effective in weeds but if I’m fishing a basin area those baits are great at getting down to those fish really quick. A lot of times they are a little bit heavier than your standard tungsten. It’s not uncommon to use walleye sized baits, like baits in that ⅛ ounce class. Those are going to sink down pretty quick.”

Hard baits include lures like Jigging Raps, Eurotackle Z-Vibers, and Northland Puppet Minnows. They come in a wide variety of sizes and colors. “On the market right now there is a lot of them from that ½ inch to that 2-½” range. Depending on the situation and the size of the fish, that will dictate what size I’m using and what size I’m starting with. If I was to pick one size bait, I would say something in that 1-½” class especially for the bigger fish that I’m trying to target.”

A lot of panfish anglers like using noodle-style rods or ultra-light setups. Tollefson says you’ll need something with more backbone to fish hard baits. “More times than not, because you’re fishing with a heavier bait, especially when you look at something like a Z-Viber ⅛ ounce or a #5 Rippin Rap, you kind of need a walleye sized rod. Look for something in that medium light class to work those baits properly. If you were to use a lot of them on your standard panfish setup, it’s just going to overpower the rod.”

Inline reels are a favorite among hardcore panfish anglers but Tollefson prefers spinning reels when fishing with hard baits. “I use a spinning reel when I’m working with spoons and hard baits. I like having a spinning reel when I can. From there it’s going to be something like a three-to-four pound fluorocarbon line. I would typically tie on a small swivel 18-inches above the bait. That’s because you don’t want that bait sitting down there spinning.” 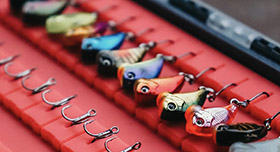 Tollefson says he prefers fluorocarbon to mono because he can feel what’s going on below the ice much better with the fluoro. “The sensitivity factor. There’s a little bit less stretch. The rod I’m using has enough flexibility in it that I’m not worried about popping hooks. If I was using a stiffer rod like a more walleye centric or medium powered rod, with an action that is not as soft, I would opt for a mono just to have that stretch factor. Because of the rod I’m using I can get away with fluorocarbon. It’s abrasion-resistant, it’s not going to come apart on the ice as easily, and you don’t have that stretch.”

If you’ve always fished the same way it can be hard to try something new. Tollefson says the best advice he can give to anglers trying hard baits for the first time is to commit to learning the technique before giving up. “Stick with it. It seems a little crazy at times when you see a 2 or 2-½” bait that crappies are willing to eat. But my five biggest crappies I’ve ever caught have all come on the same exact bait which is a ⅛ ounce Z-Viber. It’s two inches long. The biggest thing is just having some confidence. If you believe it’s not going to work, it’s not going to work. You’re not going to give it the time of day. If you’re going to use those bigger sizes, I’d make sure I was on a lake that has bigger crappies. If you’re on a lake that only has six or seven-inch crappies, it’s not likely they’re going to eat baits in the two-inch class.”

To listen to the full conversation with Blake Tollefson, click the player below or check out our podcast page by clicking here.