Matt Addington is a Minnesota based hunter, angler, and photographer. He’s passionate about capturing the essence of the outdoors with his camera. “I’ve been doing professional photography for twelve or thirteen years now. Most of my focus is in the outdoors industry. Hunting, fishing, outdoor lifestyle, and agriculture. I’m kind of in the commercial world on that front. I’ve been pretty lucky that the things that I’ve been passionate about in real life and the things I do in real life intersect with my ability to shoot photos and make a living doing it.” 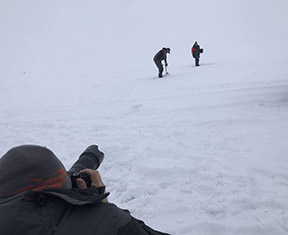 As a professional photographer, Addington has access to high-level camera equipment the average person would never dream of bringing onto the lake with them. “For a lot of years, I shot Canon DSLRs… their pro-level bodies and L-Glass. I had zero complaints and loved them. During this last year, I had the opportunity to change over to Fujifilm. We had a big project in Africa for three weeks that Fujifilm was involved with so I started shooting the Fuji XT-3 Mirrorless. I’ve been super impressed with that. I love the form factor and a lot of the things that mirrorless gives you.”

While Addington uses top-end gear, he says just about everyone has access to a fantastic camera. They can find that camera right in their pocket. “Five years ago, as a professional photographer, the capabilities that the camera has would have cost five to ten thousand dollars and now everybody has one. The best camera you can get is the camera that you have with you. That’s the other great thing about cell phones is that you usually have them with you.”

Having a great camera is no longer an obstacle for most amateur photographers but there are specific challenges to taking great ice fishing photos. “The first and most obvious one is you’re dealing with temperature. The vast majority of the work I do whether it’s ice fishing or something else is in the outdoors. You’re always dealing with the elements. Whether you’re a professional shooter or a weekend fishing warrior with your cell phone, the temperature is something you have to deal with. I’m constantly having to make adaptations to keep things warm. Keep batteries warm, specifically. They can go quickly when it’s cold. If you’re going in and out of a fishhouse, you can’t take a cold camera into a warm house. There’s a lot of things to be thinking about.” 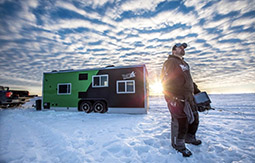 Not only is the weather a potential problem, but you’re also dealing with the unpredictability of a fish coming through an ice hole. “Ultimately, the photo everyone wants is the photo of the fish. In ice fishing, you don’t have the ability to keep the fish alive for long. You can’t keep it in a landing net off the side of the boat. You’re pulling it out from under the ice and you have a finite time to get the photos you want and get the fish back in the water if it is a fish you’re going to release.”

Addington has a plan for when fish are caught. He’s not coming up with ideas after the fish is up the hole. “Rehearse this stuff in your mind a bit. Once it does happen and once it’s on top of the ice, what do I want to get? Go through that(in your mind). If I’m on a shoot and the fish is a real operative part of what we’re shooting for the assignment, myself and the angler or anglers have talked about what the plan is once we have the fish. You don’t have a lot of time to stage and style things, make sure the lighting is right, and the angle of the fish. All of those things happen really fast. Even if it’s a fish you’re planning on keeping, they definitely take on a different look after they’ve been out of the water for a bit. They have that frozen look. You want things to look authentic.”

The most criticized aspect of fishing photography is long-arming or holding out a fish so that it looks bigger than it is. “You can talk about the whole long-arming thing. “Hold the fish out so it will look bigger!” There is an element of it that is good. You can enhance the size of the fish a little bit. With all of my work, I try to tell an authentic story and try to find the thing that is not as predictable. That would be true outside of ice fishing as well. One thing I always tell folks is to get your camera to a place that the human eye doesn’t spend its entire waking hours of the day. We walk around and we look at things and we occasionally kneel down. Get the camera right down by the ice or get the camera up above. Look at things from a unique and different angle which gives the viewer something that they feel something a little bit different than what they’re used to seeing. You owe that to the fish and you owe that to the angler.” 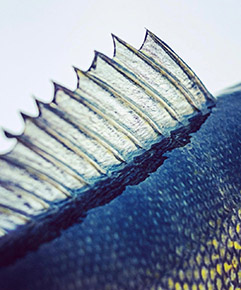 Instead of long-arming, Addington says a simple change in what’s behind the fish can make a big difference. “Another thing I see… anyone who’s ever walked in a bait shop and looked at pictures on the bulletin board, most of those photos have an angler holding a fish straight out in front of them, maybe with their arms locked. The fish looks superimposed on top of the angler’s body. I really like to get off to an angle a little bit and off to the side where the fish is presented against the open sky or against a different background than the body of the angler. Getting that camera in a unique place that does look a little bit different.”

The way an angler holds the fish can also make a big difference. “The most common mistake is people just grab that fish with their hand all the way around the body of the fish. That’s one thing that is certainly going to make the fish look smaller especially if you have big hands. If you can grip the fish under the gill plate so you can control the head of the fish and use your other hand to lift and hold while keeping your fingers under the fish. Those are things that are great to make the fish look good. If it’s a 30-inch walleye you’re going to want to remember that story but there’s a lot of times where you have a 20-inch walleye and it’s a story about how it happened, where you were, who you were with, or the beauty of the surroundings is something you want to capture. Making that fish look good as well is really important.

Matt Addington was a guest on the Fish House Nation Podcast back on Episode #45. To listen to the full conversation, click the player below or visit our podcast page by  clicking here.