Randin Olson from Lock Jaw Guide Service in Otter Tail County, Minnesota has a passion for putting his clients on big muskies during open water fishing season. But once the ice covers lakes in his area, it’s time to chase crappies. “We get some pretty big ones up here. Everybody calls it panfish paradise. I think it’s true. We get spoiled living here,” said Olson. 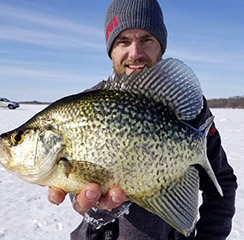 Crappies are fun to pursue in the weeds but Olson loves basin fishing as well. “In the shallows, it’s a lot more stick-and-move type of situation. You hole hop a lot more in the shallows than you do in the basin. They hang out and move slower. They don’t move as quickly in the weeds. You’re constantly popping to new pods of fish all the time. In the basin, you can slow down and call those fish to you. If you get in the general area and put some of those bigger baits down you’ll bring those fish to you. It can be a fun time.”

When fishing the weeds, Olson typically ties on a tungsten jig and plastic. But in the basin, he says bigger is better. “I go a lot bigger in the basin than I do in the weeds. I’ll use some big stuff in the weeds but not very often. Out in the basin I really like a size 3 Puppet Minnow or a size 4 Rippin Rap. Anything big, bulky, loud, and annoying. Two inches is about as big as I’ll go. That bigger profile works really well. It calls stuff in. You can catch all sizes on them too. You’re not stuck if you’re on a lake with small crappies. They’ll come up and eat those like crazy.”

If the lake you’re fishing has multiple basins, it can be tough to decide where to fish. Olson suggests using depth as your guide to choosing the best basins. “I try to see what the depths are in them. I have a max depth of about 45 feet. If it’s deeper, I won’t go into that. Generally speaking, if you can find a basin with big weed beds around it, that will usually have a little more bugs or habitat for them to cruise all winter long. If they all look the same, pick the deepest one, and then go to the second deepest and the third deepest. It’s either the deepest hole or if you get lucky there are some weeds around it.” 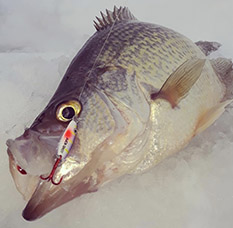 Once you’ve chosen the basin to fish, finding the “X” on that basin is the next spot. “If there’s a piece of structure sitting into that flat, I’ll usually start from there and radiate out. I’ll start drilling holes and looking for fish. If there is no structure, I’ll go straight to the middle and work backwards from there. You have to drill a lot of holes to find that school.”

When it comes to working an area, Olson has a process. “I’ll start off just by drilling a straight line of maybe ten or twelve holes. I’ll take one rod and a flasher when I do it by myself. It’s easier with another person. I’ll check each hole. If I don’t see any fish, I’ll drill another twelve and do the same thing until I mark a fish or something that looks really good like a chunk of weeds or something like that. When I see that, I’ll put five or six holes around that one and I’ll spend 20 or 30 minutes in that area. If nothing happens, repeat the process.”

Olson believes a lot of anglers fish with their lure too low in the water column. “I would say about ⅝ of the way down is a good starting spot. ⅝ or ¾, something like that. It’s high enough that you’re going to get some suspended fish to come over and it’s low enough that if you have fish coming across the bottom that they can still feel it and still come over.”

One of the downsides of basin crappie fishing is anglers can often find fish at depths of 30 feet or more. Bringing crappies up from those depths can cause barotrauma mortality in released fish. “If those fish are 25 or more feet down, that’s about as deep as I care to get them. I know you can get them out there in 40 or 50 feet. In the summertime I usually don’t fish past about 30 or 32 feet. For whatever reason in the colder water, I’ve had to pull that back up to 25ish, for those crappies for sure.”

Randin Olson is a recent guest on the Fish House Nation Podcast. To hear the full conversation, click the player below or click here to visit our podcast page.