First ice is like Christmas morning to diehard ice anglers. The anticipation of pulling the first fish of the year through a small hole in the ice keeps these fishermen and ladies up at night as soon as temperatures start to dip below freezing. Greg Hayes from 419 Outdoors in Rice Lake is one of these first ice anglers. He fondly remembers heading out on the ice with his dad as a youngster. “When I was younger, probably like every other kid, I was going out tip-up fishing for walleyes with dad… That wasn’t me. I have to be on the move. I can’t sit still. When I picked up a jig stick and started crappie chasing I fell in love right away. This was my speed. They’re aggressive fish but they’re smart fish. So many times when you’re marking those fish, they won’t bite. I love that challenge aspect of it too.” 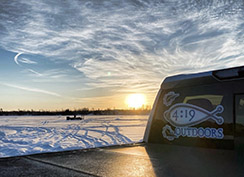 Hayes’ love affair with crappies started early but even he admits the game has changed since hooking his first papermouth. “It’s changed a lot. The electronics, the mapping, the gear, the shacks, the float suits… all that stuff. This whole industry has grown so rapidly in the last ten or twenty years. It’s really exciting to see what every year brings at this stage of the game.”

If you’re heading out on the hardwater at first ice, safety needs to be a priority. No ice is 100% safe but early ice is thin and can be unpredictable. Hayes highly recommends a float suit. “Probably about five years ago, I bought my first ice suit. It was big, bulky, and it wasn’t really comfortable but it worked. But it kept me warm. Prior to that, I was a Carhartt kind of guy. They were frozen and big and bushy on your feet. But that’s probably the biggest thing for safety. You want something with some flotation, something like the Eskimo Keeper Series which is what I run right now. If I’m going out, I have to have a float suit on. I don’t care what the ice conditions are. Secondly, are going to be ice picks, ice cleats, and a chipper. That’s what I’m going to use to get out on the ice.” 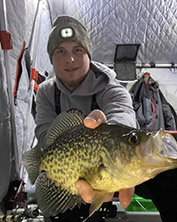 When it comes to other equipment, Hayes likes a rod with a super-sensitive rod. “I really like an ultralight rod. There are some people out there that like a little stiffer action. I really love an ultralight, the softer the better. Crappies have such soft mouths having a soft rod is key. I like to use braid with a fluorocarbon leader just for that extra sensitivity.”

On the business end of the rod, Hayes is a fan of small hardbaits and micro tungsten jigs. “I like to throw a combination of things. I like to throw a Kenders K-Rip. They’re itty-bitty. They come with a treble hook so you can rig waxies which works really good… But they also come with a meat hook. I put the meat hook on there right away and I put a crappie minnow on there and that’s typically how I fish it. I also like to use the legendary Ice Flies made by Scott Wilhelm. They are super low profile tungsten jigs that get down fast. I rig them with a crappie minnow.”

Minnows are a staple for crappie anglers but Hayes is doing something a little different when it comes to how he rigs them. “A lot of people use minnow heads. I like to pinch the minnow off right behind the gill plate to get some of the guts and good scent out. Then I hook it through the belly and out the back. That lays on that jig and flutters just right. It’s not a crappie minnow hooked through the back that looks like a bait with a shiny gold thing sticking out of its back. It has a natural presentation. The way it falls, it kind of sweeps and flutters nice.” 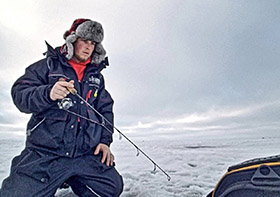 Of course, if you’re not fishing where there are active crappies, you won’t catch fish. Hayes says the biggest mistake he sees most people make is fishing the same spots year after year. “Don’t fish history. So many people go out and they pull their shack to the same place they pulled it out since their dad and grandpa fished showed them how to do it. I erase all my waypoints every year, I start fresh and start drilling every year. I like to stay mobile. I carry the Pistol Bit with a Milwaukee drill with a 9ah battery. I drill, drill, and drill. Sometimes I will go two or three outings and only wet the line once... Get out there, start drilling holes, drop the graph in, and just search for those fish. I fish Rice Lake. It’s where my store is. It’s where I live. It’s become my home lake. I love it. I fish the south basin. You can go out there anywhere and find fish. But every year the quality fish move.”

Hayes is a basin angler. But not every basin is made the same. Finding the right basin and fishing the right spots in that basin makes all the difference. “I don’t like to fish a basin that has rock bars or sand transitions. I just want a pure muck basin. I want steep dropoffs on both sides and I want some good flats with some weeds on them. I do fish at a little different time too. I fish the mornings. I don’t fish at night anymore. I get up before the sun comes up and I fish until the sun comes up. That’s because I’m catching fish out in the basin. I’m a morning guy and those fish are in the basin in the morning. As the sun comes up into the weeds they go.”

Hayes is a recent guest on the Fish House Nation Podcast.  To listen to the full episode, press play on the player below or click here to go to our podcast page.