The Red Lake system is the largest inland lake in Minnesota. There are roughly 280,000 acres of water for walleyes to roam. The lake system is broken up into a lower lake and upper lake. About 60% of Upper Red Lake and all of Lower Red Lake is under the control of the Red Lake Band of Chippewa Indians. Nearly 50,000 acres on the east side of Upper Red Lake are open to public sportfishing. This area of the lake is dotted with resorts so there are a variety of access points and plowed roads on the lake. 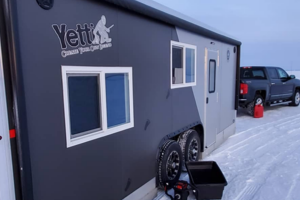 The Red Lake fishery experienced a catastrophic crash in the late 1990s, mostly due to overharvesting. It is one of the worst fishery collapses in the upper Midwest. But the Red Lake Band and the State of Minnesota continue to partner together on a historic comeback effort. The lake was closed to walleye fishing for seven years and 90 million walleye fry were stocked in the lake over a six-year period. After reopening, anglers have now enjoyed walleye fishing on Red Lake for over 15 years. Through sound and intensive management, the Red Lake system is once again a walleye hotspot.

We recently spoke with DNR Fisheries Manager Tony Kennedy on the Fish House Nation Podcast. Tony is a large lake specialist based in the Bemidji office. He provided us with background on how the lake is now managed. “Red Lake is managed with a harvest plan that has been written and approved by the Red Lake Fisheries Technical Committee which is comprised of the State of Minnesota, the Red Lake Band Fish and Wildlife Service, the Bureau of Indian Affairs, as well as a representative from the University of Minnesota. The original harvest plan was written in 2005 before the fishery was reopened. After ten years of fishing, the plan was revised in 2015, once we realized we could take(more fish). We started pretty conservatively, understandably so after Red Lake’s history. We loosened things up a bit and got a little bit larger harvest ranges.”

Regulations and harvest limits are based on net surveys conducted in the fall. “There are multiple different target harvests depending on how many target females we have in the population. This is called spawning stock biomass. When spawning stock biomass is in what we call optimal condition, we have one target harvest. When we’re in surplus, as we have in most years since we’ve been open, then we need a more aggressive target harvest which leads to more liberal limits. Everything boils down to how many mature females are in the population. That’s determined by our fall gill net assessment which we finish each year in early October. It takes about a month for us to get all nets run. Once that comes out, we take a look at it, make a decision, and come out with winter regulations.”

Last season, Upper Red Lake had a four-fish limit. During the 2022-2023 ice season, the bag limit has been cut down to three fish. Kennedy says the net data from this fall led the DNR to establish a lower limit for this season. “Last year were in the surplus condition so our target harvest was 240,000 to 336,000 pounds. So we could have that more aggressive limit. For the 22-23 harvest year, we’re in the optimal condition. The target harvest is 120,000 to 240,000 pounds. The three-fish limit gives us a better chance of ending the 22-23 harvest year within the target range.”

Most lakes manage their walleye population by using a minimum size limit on harvestable fish. Upper Red Lake does the opposite. Only one of the three walleyes harvested can be over 17”. When the walleye fishery reopened, there was a protected slot limit. Kennedy believes today’s regulations are more angler friendly. “The idea of those protected slots was full protection of those spawning-sized females. We realized we were being overprotective of those females. There’s a number of males, especially at 17” that recruit into that size. They were essentially protected for the rest of their lives. We thought there was more room for harvest of those fish. There was some talk of allowing one fish in the slot. That seemed sort of complicated so we went with the “one over” regulation where you can basically have one fish of any size and the rest need to be below 17 inches. Red Lake has a long history of being able to produce strong year classes of fish. As long as we have the right amount of females, we get good reproduction. There’s lot of spawning habitat. There are big windswept basins, it’s very fertile. It’s all about having the right amount of females in there. When the fishery collapsed we didn’t have enough females because of overharvesting.”

There was a tremendous crappie boom on Red Lake about 20 years ago. The lake was known for numerous giant crappies. But like the walleye population, the crappies were also decimated. They haven’t fully recovered but Kennedy says they’re making a comeback. “They have sort of retreated to becoming a background species. We do see some thick fish. Red Lake is known for having crappies with big shoulders on 14 and 15-inch fish. There’s a decent bunch of them out there right now at about 11 inches. That’s the most significant recruitment of crappies we’ve seen since the walleye recovery… They’re out there. It’s pretty difficult to target them. They’re not at that level of abundance. Some of the folks that targeted them during the boom and know where they tend to congregate can catch a few more than the average guy. But it’s sort of a bonus fish.” 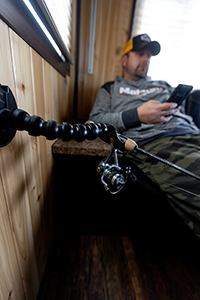 If you’re headed to Red Lake, having a deadstick in the water in addition to jigging efforts is key to maximizing your chances of catching fish. The Catch Cover Rod Holder is a great way to securely fish a deadstick. Rattle baits like the Northland Buckshot Rattle Spoon are also popular lures for taking walleyes on Upper Red. Kennedy advises anglers to get timely local information before heading out on the lake. “Talk to the local bait shops. They’ll put you on good colors and good lures to try. My advice to everyone whether it is your first time or not your first time is to get as far away from the next closest angler as you possibly can. There’s not a lot of structure. There aren’t real pinpointed areas where the walleyes are concentrated. It seems like the farther you can get away from the next closest person, that’s where you want to fish.”

Walleyes and crappies are probably the two most popular species of fish during ice fishing season but Kennedy says Upper Red Lake has some fantastic pike fishing as well. “Red has a really high-quality northern pike population, with outstanding size structure. There are fish up to 44+ inches. It doesn’t get a lot of targeted pressure. Lake of the Woods is well known for its northern pike fishing. They may be a little trickier to target them on Red but they’re out there. There’s a 30-to-40 inch protected slot, with one fish allowed over that. It’s a memory-making fish when you do find one.”

Want to listen to the entire conversation with Tony Kennedy? Click here or press the player below. Read our previous Red Lake blog post by clicking here.